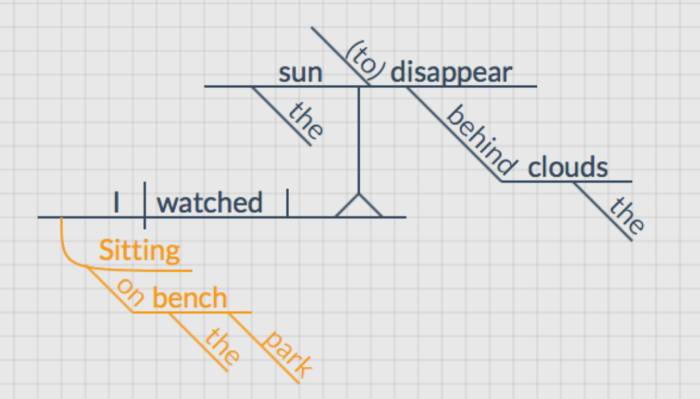 In the following text, each of the italicized participle phrases modifies the subject that follows directly after it—it is clear that Joe was running the marathon, Sue was cleaning out the messy drawer, and the hikers were walking the trail. I believe that all of these particle phrases are being used correctly due to the fact that all of them are placed directly adjacent to the nouns that they modify.

By contrast, dangling participles are participles or participle phrases that are not placed next to the nouns that they modify, causing huge confusion and not a small number of unintentionally humorous grammatical errors as a result. There must be a noun to modify a participle, just as there must be a noun to modify an adjective. As the name implies, a dangling participle is one that is left dangling out in the cold, without the ability to be modified by a noun. As an example:

The sentence now makes clear that it is the “I” who is looking around the yard at the sprouting sea of dandelions, since dandelions are unable to see.

It is not uncommon for even the greatest literary figures to fall prey to dangling modifiers. A line from Shakespeare’s most famous play, Hamlet, reads as follows: “Sleeping in my orchard, a serpent stung me.” You would be able to correct the sentence by including the missing pronoun, which in this case would be “I,” for example, “I was stung by the serpent while sleeping in my orchard.”

It is also possible to find mundane, but unintentionally funny, examples of dangling participles. As an example, one might write: “Running after the school bus, the backpack bounced from side to side.” In this case, the writer can insert the first person, the second person, or the third person into the sentence and place the participle phrase next to it.

Whenever possible, do not use dangling participles in your sentences because they can cause them to sound awkward and can give them unintended meanings. There are several humorous examples given by the Writing Center at the University of Madison:

Firstly, the dangling participle in the first sentence makes it seem as if Marvin is the one who is “oozing across the floor.” Secondly, the second sentence seems to imply that the candy machine, itself, is waiting for the Moonpie. As seen in sentences 3-5, the bananas seem to be coming out of the market, the children look as if they are “trapped” in the plastic containers, and the oysters seem to be coming “down the stairs” for dinner.

There are two ways to correct these sentences: either add the proper noun or pronoun that is missing, or rearrange the sentence so that the participial phrase appears next to the noun, proper noun, or pronoun it modifies:

Be careful not to use dangling modifiers or you run the risk of giving your readers an unintended reason to laugh at your work if you do.