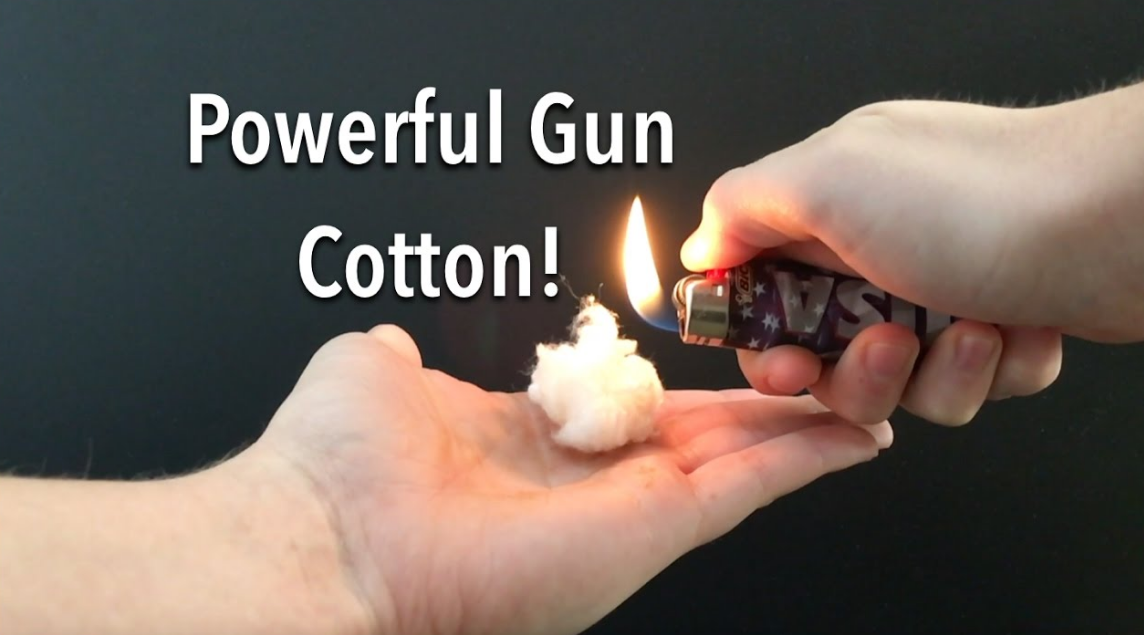 This has the effect of “planting” oxygen deep within the cotton fibers, making it much easier to burn. (Chemically, nitrocellulose is similar to nitroglycerin and trinitrotoluene [TNT], which also contain nitro groups).

Once all of the acids have been rinsed off, and the guncotton is allowed to dry completely, applying a small flame, heat, or a spark will set the guncotton off, producing a flash of orange flame. Almost all of the cotton is converted to gaseous products, including carbon dioxide, carbon monoxide, water vapor, and nitrogen gas.

In the following demonstrations, guncotton has been prepared by overnight treatment of cotton in concentrated nitric and sulfuric acids, followed by thorough rinsing and 24 hours of drying. In the first film clip, a ball of guncotton is ignited, resulting in a flash of flame and a nice “poof” sound effect. (Notice that nothing remains of the original cotton ball; an untreated cotton ball would leave a lot of ash and unburned residue.) In the second film clip, a continuous line of guncotton has been fastened to a meter stick with double-stick tape; when it is ignited at one end it takes less than three seconds for the roaring flame to travel to the other end. (The bumps on the meter stick when the demo is finished are the pieces of tape I used to fasten the guncotton.)

Since the guncotton flames up so quickly, I have found that the safest way to light it is with a butane lighter stick. This gives you some distance between the point of ignition and your hands. Another safe method of ignition is to heat up the end of a pair of tongs or a glass stirring rod in a Bunsen burner flame. Then touch the hot end to the guncotton. An ordinary kitchen match or a spark from a striker will also work. However, I’ve found that I usually end up burning the hair off my fingers when I do it that way.

Once it has dried out, the guncotton will stay good for at least a couple of months. I don’t like to leave unexploded guncotton lying around, since it ignites so easily, but if I’m going to use it soon I usually store it wrapped in aluminum foil, or in a plastic bottle covered with saran-wrap or foil.

Guncotton can also be stored underwater, where it will be safe from accidental ignition and will stay intact indefinitely.

The mixing of nitric and sulfuric acids is a very exothermic process. Slowly add the nitric acid to the sulfuric acid, and then cool in an ice bath.

What is gun cotton used for?

When dry guncotton is exposed to the air it does not explode when ignited but burns with remarkable rapidity. When dry, however, guncotton can explode violently when struck sharply between rigid objects or surfaces.

What is a gun cotton slab?

Highly explosive nitrocellulose, made by breaking down clean cotton in a mixture of one part nitric acid and three parts sulfuric acid: used in making smokeless powder.

Is nitrocellulose a low explosive?

Low explosives, such as black powder and nitrocellulose, undergo relatively slow auto combustion when set off and evolve large volumes of gas in a definite and controllable manner. Many different types of explosives are manufactured.