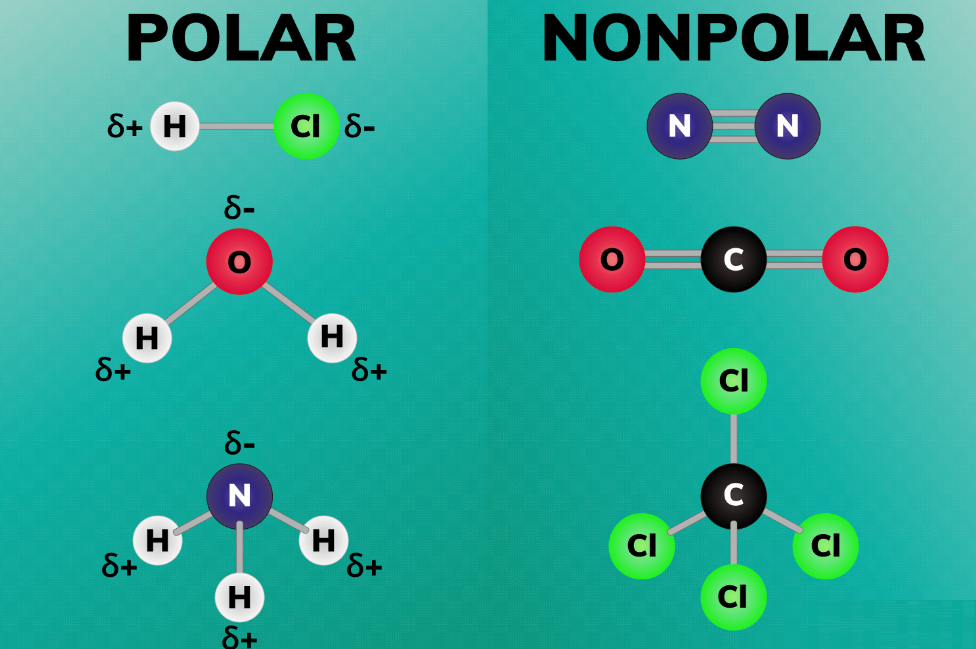 We explain the difference between polar and non-polar bonds in this chemistry tutorial. Then we will tell you what a polar molecule is, and what a non-polar molecule is. Last but not least, you discover what a dipole moment is.

What do polar and non-polar bonds mean?

What makes a bond polar?

Polar bonds are a type of covalent bond. Polar bonds are formed when two or more atoms have significantly different electronegativities (>0.4). These bonds do not share electrons equally, which means the negative charge from electrons is not evenly distributed in the molecule. This causes a dipole moment. If there is one positive end of the bond and one negative end of the bond, then a dipole moment has occurred. Historically, polar bonds have been found in the bonds between hydrogen and oxygen in water. As a result of the electrodepositivity difference of 1, the bond is referred to as a polar bond. Hydrogen electrons are more attracted to oxygen electrons because oxygen is more electronegative.

What makes a bond non-polar?

What are Polar Molecules?

In chemistry, the definition of a polar molecule is a molecule that has a charge on one side of the molecule that is not canceled out. It has a region of partial charge. It has one slightly positive end and one slightly negative end. The electrons are generally asymmetrical, with an uneven distribution.

Molecules with polar covalent bonds can have ionic or polar bonds. Molecules with two poles are called dipoles. The dipole moment is the result of measuring the amount of polarity in a molecule.

Hydrofluoric acid HF is polar due to its large electronegativity difference between hydrogen and fluorine. The molecule is polar covalent.

Is water a polar molecule?

Definitely, since the molecule is bent and not symmetrical. A net charge results from electrons being attracted to oxygen atoms.

Is acetone polar or nonpolar?

The carbonyl group in acetone makes it somewhat polar. There are different degrees of polarity, and acetone is less polar than water because only part of the acetone molecule has a polar bond.

When dissolved in nonpolar solvents, nonpolar molecules tend to dissolve well, but tend not to dissolve in water.

No, CO2 is not polar, even though the bonds are polar. Due to the linear symmetry of the molecule, the negative charges around the oxygen atoms cancel each other out.

Is HCl polar or nonpolar?

Hydrochloric acid HCl has a polar bond due to chlorine’s electronegative property as compared to hydrogen’s. There is no symmetry that could cancel out the dipole charge.