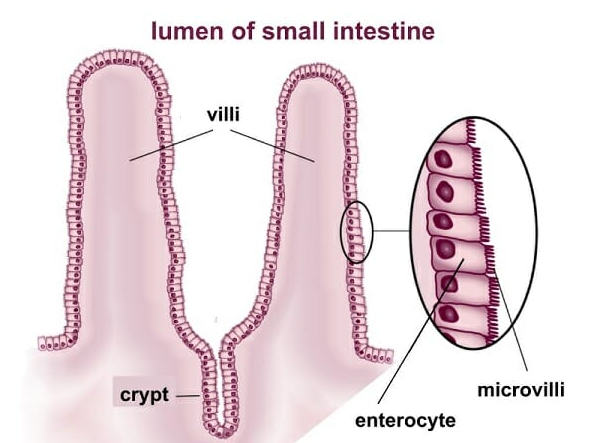 Simple columnar epithelia are tissues made of a single layer of long epithelial cells that are often seen in regions where absorption and secretion are important features. The cells of this epithelium are arranged in a neat row with the nuclei at the same level, near the basal end.

In a cross-section of the organ, these cells appear like thin columns, differentiating them from flattened squamous cells and square-shaped cuboidal cells. Among simple epithelia, this sub-type can withstand some degree of wear and tear.

These tissues can be classified as ciliated or non-ciliated based on the presence of motile cilia. While nearly every eukaryotic cell has a single, primary non-motile cilium, involved in development and homeostasis, most cells are often called ‘non-ciliated’ to distinguish them from structures that move particles in a particular direction.

Ciliated cells of these epithelia are found in the fallopian tubes and endometrium and are involved in the movement of the ovum. Non-ciliated cells are seen in the stomach, small intestine, large intestine, and rectum. These cells are often seen with a ‘brush border’, where the apical surface of their plasma membrane is covered in minute actin-based projections called microvilli. Microvilli derive their name from the term ‘villus’ which denotes finger-like projections of a mucous membrane. Villi are seen on the inner surface of the small intestine, and the smaller projections from cells of the epithelium are called microvilli.

These long cells are specially adapted for secretion and absorption. The presence of microvilli on the apical surface of this epithelium increases surface area. In the small intestine, these cytoplasmic projections contain membrane-bound enzymes that complete the final stages of digestion. Their location on the membrane, close to transmembrane transport proteins allows the end products of digestion to be quickly and immediately absorbed into the body.

This epithelium is also structured to provide a barrier against the non-specific movement of lumenal substances. Junctional complexes that limit the passage of molecules and ions through intercellular spaces hold the cells of this epithelium together. This is particularly important in the digestive system, which has a large surface area interacting with the external environment.

Ciliated cells of this epithelium are designed to transport particles in a specific direction through wave-like movements.

Simple columnar epithelia are found in the stomach, small intestine, large intestine, rectum, fallopian tubes, endometrium, and respiratory bronchioles. In essence, they are found in parts of the respiratory, digestive, and reproductive tracts where mechanical abrasion is low, but secretion and absorption are important. For instance, in female reproductive organs, this epithelium lines the fallopian tubes, endometrium, and the inner part of the cervix (endocervix). The external ectocervix, vagina, and labia that are in contact with the external environment, are lined by stratified tissue.

In the respiratory system, the upper respiratory tract traps large dust particles or bacteria. This region is lined with stratified epithelia. As the passages narrow, however, the epithelium shifts to simple columnar in the bronchioles. Predictably, toxic fumes or viral particles that can escape the protective mechanisms of the upper respiratory tract are the most common causes of infections in this region of the respiratory system. As the passages narrow further, a single layer of squamous cells lines the alveoli, where flattened cells allow the transport of gases.

This epithelium is also seen in the stomach, small and large intestine, where food has largely been transformed into a homogeneous, liquid chyme. In the mouth, esophagus, and anus, where textures can vary, stratified epithelia protect underlying tissues.

Bronchioles are small passageways in the respiratory tree that are free from cartilage and glands. They are formed by the repeated branching of larger bronchi and are part of the system that conducts air towards the site for gas exchange. Bronchioles can divide further into terminal bronchioles, which then move to respiratory bronchioles containing alveoli. These tubular structures are usually less than 1 mm in diameter and therefore need to be lined by a single layer of cells.

Terminal bronchioles are lined by simple columnar epithelia containing club cells that secrete surfactants. This surfactant is important to prevent the bronchiole and smaller structures from collapsing during expiration and to neutralize harmful substances in the fluid within the lungs. Surfactant production in a fetus often determines whether a premature birth is viable since it is important in allowing the baby to breathe outside the womb. Therefore the cells of this epithelium play a crucial role in infant development. A few ciliated cells are also seen lining bronchioles.

The intestinal epithelium is the layer of cells lining the small and large intestines. The cells of these epithelia are held together by tight junctions that occlude partially digested food from the body and form an impenetrable barrier. This epithelium contains a varied population of cells, with the largest proportion being formed by enterocytes. These cells produce many membrane-bound digestive enzymes.

The presence of specific transport proteins in the vicinity of these enzymes allows these cells to play an important role in the absorption of nutrients such as monosaccharides, lipids, and amino acids. They are also important for the uptake of water, ions, and vitamins. Some cells of this epithelium are involved in secreting the hormones of the digestive system that regulate digestion, peristaltic movement, and water balance. Other cells secrete mucus or play a role in immunity.

Which of these is true about simple columnar epithelia?

A. Nuclei are located at the same level, near the apical end
B. Many cells containing microvilli are made of microtubules
C. Play a role in secretion, absorption, immunity, fertility, digestion, and respiration
D. Present in alveoli, and fallopian tubes