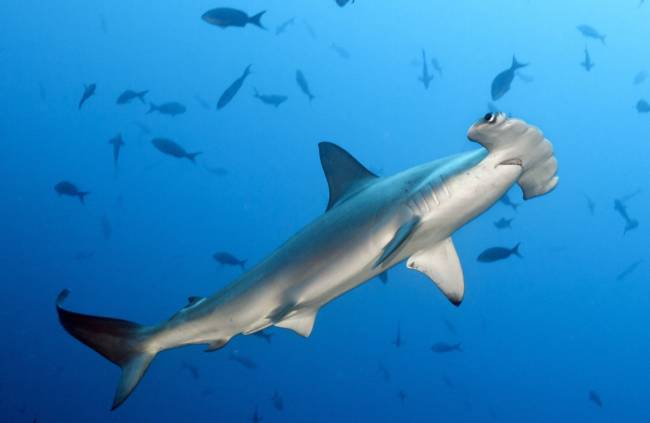 Hammerhead sharks are identifiable by their distinctive hammer- or shovel-shaped heads. The majority of hammerhead sharks live in warm waters close to shore, but they pose little danger to humans. You can learn about hammerhead sharks here, which range in size from 3 feet to 20 feet (1 to 6 meters).

The great hammerhead (Sphyrna mokarran) is the largest of the hammerhead sharks. On average, these animals are about 12 feet (3.6 meters) long, but can reach a maximum length of about 20 feet (6 meters). A notch in the middle of their large “hammer” distinguishes them from other hammerheads.

In warm temperate and tropical waters, great hammerheads can be found close to shore and offshore. The Atlantic, Pacific, and Indian Oceans; the Mediterranean and Black Seas; and the Arabian Gulf are home to them.

Another large shark, the smooth hammerhead (Sphyrna zygaena), can reach 13 feet (4 meters) in length. They have a large “hammer” head without a notch in the middle.

They can be found as far north as Canada, along the U.S. coast down to the Caribbean, and off of California and Hawaii. In Florida’s Indian River, they have even been seen in freshwater. They are also found in the western Pacific, around Australia, South America, Europe, and Africa.

Scalloped hammerheads (Sphyrna lewini) can also reach lengths of more than 13 feet (4 meters). There is a notch in the center of the outer edge of this species’ head, and its indentations resemble scallop shells.

Sharks with scalloped bonnetheads have rounded heads shaped more like mallets than hammers. From Mexico to Peru, these sharks live in a relatively small range in the eastern Pacific.

Winghead sharks (Eusphyra blochii), or slender hammerheads, have a very large, wing-shaped head. With a maximum length of about 6 feet (1.8 meters), these sharks are medium-sized.

From the Persian Gulf to the Philippines, and from China to Australia, winghead sharks inhabit shallow, tropical waters.

In the scoophead shark (Sphyrna media), the head is mallet-shaped with shallow indentations. A shark of this type can grow up to about 5 feet (1 meter) in length.

In the eastern Pacific from the Gulf of California to Peru, and in the western Atlantic from Panama to Brazil, little is known about the biology and behavior of these sharks.

Sphyrna tiburo (bonnethead shark) can reach a maximum length of about 5 feet (1.5 meters) and is about the same size as scoophead sharks.

Their heads are narrow and shovel-shaped. Tropical waters in the eastern Pacific and western Atlantic Oceans are home to bonnethead sharks.

A smalleye hammerhead shark (Sphyrna tudes) can also reach a maximum length of about 5 feet (1.5 meters).

Their heads are broad, arched, and mallet-shaped, and have a deep indentation in the center. The eastern coast of South America is home to small eye hammerheads.

The whitefin hammerhead (Sphyrna couardi) is a large hammerhead that can reach a maximum length of more than 9 feet (2.7 meters).

The whitefin hammerhead has a broad head and narrow blades. Off the coast of Africa, these sharks live in tropical waters in the eastern Atlantic.

The Carolina hammerhead (Sphyrna gilberti) is a newly recognized species without widespread photographic evidence. There are fewer vertebrae in this species than in the scalloped hammerhead.

Additionally, it differs genetically from scalloped hammerheads and other sharks. How many more shark species are out there that we don’t know about if this hammerhead was discovered as recently as 2013?