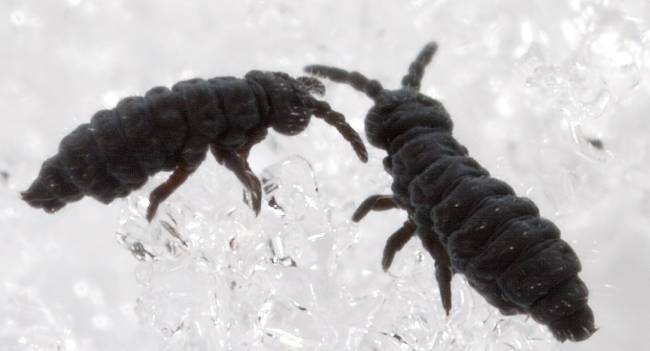 A group of snow fleas hopping merrily in melting snow is always a thrill for insect enthusiasts after a long, cold, nearly bug-free winter. Snow fleas aren’t actually fleas, despite the fact that few people like them. Arthropods, such as spiders, scorpions, horseshoe crabs, and katydids, are what snow fleas are.

Snow fleas in North America usually belong to the genus Hypogastrura and are blue in color. There is a tendency for snow fleas to aggregate around tree trunks. Sometimes they gather in such large numbers that snow appears black or blue.

On first glance, snow fleas may appear as motes of black pepper sprinkled on the snow, but closer inspection reveals that the pepper is moving. A closer look will reveal that snow fleas are similar to other springtails despite being tiny (reaching only two to three millimeters in length).

Why and How Do Snow Fleas Jump?

Flying is not possible for snow fleas because they lack wings. Walking and jumping are their modes of movement. Snow fleas do not use their legs to jump like grasshoppers or jumping spiders. The springtail catapults itself into the air by releasing a spring-like mechanism called a furcula, which is a tail-like structure that’s folded underneath the body.

For such a tiny bug, the furcula launches the snow flea several inches in the air when it releases. Despite not being able to steer, it is an effective way to escape potential predators on the move.

Why Do Snow Fleas Gather on the Snow?

Although springtails are quite common and abundant, they’re so tiny that they often go unnoticed. Even during the winter, snow fleas feed on decaying vegetation and organic matter in the soil and leaf litter.

Snow fleas don’t freeze in the winter thanks to a protein in their bodies that contains glycine, an amino acid that inhibits the growth of ice crystals. In subzero temperatures, glycine (which works much like antifreeze in your car) keeps snow fleas alive and active.

On warm and sunny winter days, especially as spring approaches, snow fleas emerge from the snow in search of food. Their presence on the surface, flinging themselves from place to place, attracts our attention.