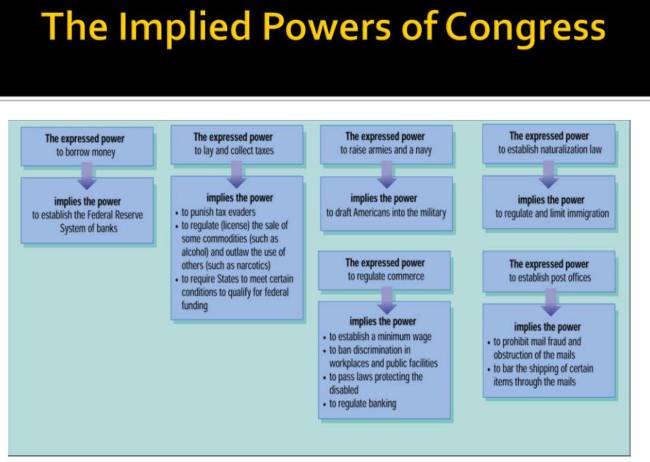 In the United States federal government, implied powers refer to those powers exercised by Congress that are not expressly granted to it by the Constitution, but are deemed “necessary and proper” for executing those constitutionally granted powers.

Is it possible for Congress to pass laws that the Constitution does not specifically authorize?

Congress is granted a very specific set of powers in Article I of the Constitution, known as “expressed” or “enumerated” powers, which are the basis for American federalism — the division and sharing of powers among the federal and state governments.

In a historic example of implied powers, President George Washington asked Treasury Secretary Alexander Hamilton to defend the First Bank of the United States when Congress created the bank in 1791 over the objections of Thomas Jefferson, James Madison, and Edmund Randolph.

In a classic argument for implied powers, Hamilton argued that a government’s sovereign duties implied that it reserved the right to use whatever powers it deemed necessary to fulfill those duties.

In addition, Hamilton argued that the “general welfare” and “necessary and proper” clauses of the Constitution gave the document its elasticity. President Washington signed the banking bill after being convinced by Hamilton’s argument.

In McCulloch v. Maryland, the Supreme Court upheld a bill passed by Congress creating the Second Bank of the United States based on Hamilton’s 1791 argument. As the Constitution grants Congress certain implied powers beyond those explicitly stated, Marshall argued that Congress had the right to establish the bank.

In Article I, Section 8, Clause 18, Congress is granted the power to pass laws that appear unspecified, which is often controversial.

“To make all laws necessary and proper to carry into effect the foregoing powers, and all other powers vested in the United States Government, or in any Department or Officer thereof, by this Constitution.”

The so-called “Necessary and Proper Clause” or “Elastic Clause” gives Congress powers, while not explicitly listed in the Constitution, that are presumed to be necessary to implement Article I’s 27 powers.

Among the ways Congress has exercised its broad implied powers under Article I, Section 8, Clause 18 are:

Implied powers are not a new concept in the Constitution. Congress will need to address unforeseeable situations and issues throughout the years, and the 27 express powers listed in Article I, Section 8 will never be adequate to anticipate them all.

As the most dominant and important branch of government, the legislative branch must have the broadest lawmaking powers possible. In order to ensure Congress had the legislative leeway it needed, the framers included the “Necessary and Proper” clause in the Constitution.

Congress has been controversial since the earliest days of government due to the subjective nature of the determination of what is and isn’t “necessary and proper”.

A landmark Supreme Court decision in 1819 acknowledged the existence and validity of Congress’ implied powers.

McCulloch v. Maryland asked the Supreme Court to rule on the constitutionality of federally-regulated national banks passed by Congress.

The majority opinion of the court affirmed the doctrine of “implied powers,” which grants Congress powers that are not expressly listed in Article I of the Constitution but are “necessary and proper” to carry out those powers.

Since banks were properly related to Congress’ expressly enumerated powers to collect taxes, borrow money, as well as regulate interstate commerce, they were constitutional under the “Necessary and Proper Clause.”

You might also be interested in learning about so-called “rider bills,” a method lawmakers often use to pass unpopular bills opposed by their colleagues.

In its very nature, and especially in its application, the “necessary and proper” clause has caused controversy and will continue to do so.

The interpretation of “necessary and proper” is entirely subjective, depending on the opinion of the interpreter. One person may consider a measure necessary, while another may not. Additionally, since the clause appears to expand the government’s constitutionally granted power without requiring an amendment process, questions arise about where that power ends.

Because implied powers are broad, often vague, and always open to interpretation, they can be both positive and negative. Some may view their expansion of federal power as positive, while others may see them as a way to circumvent the constitutionally mandated legislative process to justify an overreach.

The Second Amendment right to bear arms, for instance, is the subject of much debate today. According to some, the government’s implied right to regulate firearms under the Commerce Clause is beneficial for the nation. Civil liberties are allegedly violated, according to others.

Among the long-standing debates over implied powers is the Tenth Amendment. This is the last amendment of the Bill of Rights and states that “powers not delegated to the United States by the Constitution, nor prohibited by it to the States, are reserved to the States respectively, or to the people.” Thus, the expansion of implied powers may be interpreted as infringing upon the rights of states or individuals.

It is also possible for the president to discuss foreign policy. Changes in approach may be needed, such as during the Cold War when containment was the policy. Additionally, the president can issue executive orders based on implied powers. In World War II, Franklin Roosevelt issued Executive Order 9066 to establish internment camps for Japanese Americans.

Implied Powers of the President

Presidents of the United States also have implied powers, although they are not as extensive as those of Congress. A prime example is the power to make executive agreements, which are similar to formal treaties with other nations, but do not require Senate approval.

Is there any implied power in the presidency?

There are implied powers for the president as well. An example would be the power to make executive agreements. Senate approval is not required for these treaties, which are similar to formal treaties with other nations.

Foreign policy can also be discussed by the president. This may mean a change in approach, such as the Cold War policy of containing Communism. Executive orders can also be issued by the president based on implied powers. During World War II, Franklin Roosevelt issued Executive Order 9066 establishing Japanese American internment camps.

As a federalist country, the federal government distributes and shares power with state governments. The balance and debate over power between state and national governments are directly affected by implied powers. Congress has historically gained more power through implied powers.

A majority of constitutional interpretations have confirmed federal authority based on implied powers in Article 1. Interpretations of implied powers related to the commerce clause, for example, strengthened Congress’s authority. Gibbons vs. Ogden, decided in 1824, affirmed Congress’ authority over New York and New Jersey as a result of its power to regulate interstate commerce.