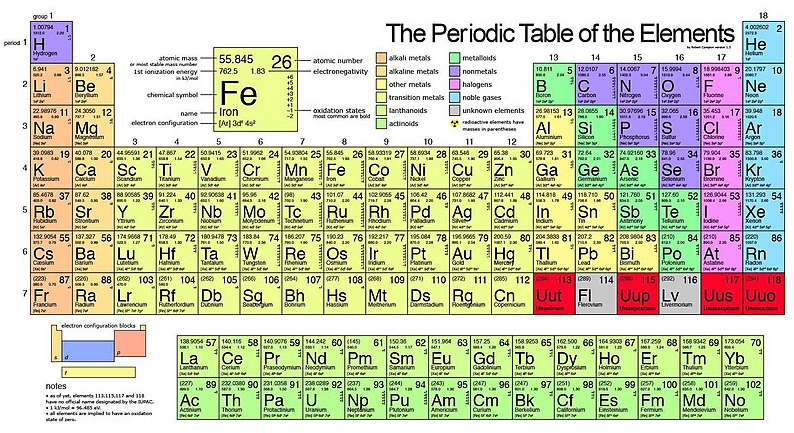 How to Read the Periodic Table?

A periodic table is organized into groups (vertical columns), periods (horizontal rows), and families (groups of similar elements). The number of electrons in the valence electrons of elements belong to the same group. In the meantime, elements in the same period have the same number of occupied electron shells. Russian chemist Dmitri Mendeleev noticed there was an innate pattern of organization to the chemical elements in 1869. This led to the development of the periodic table. In this table, we can tell a lot about the properties of elements based on their locations. Periodic trends are a quick way of understanding an element’s chemical and physical properties. On the periodic table, these trends show you where the highest and lowest types of properties are concentrated.

Periods are the rows of the periodic table, and groups are the columns. In addition to the lanthanides and actinides, there are 18 groups and 7 periods.

Periods on the Periodic Table

What is a period on the periodic table? Periods are the horizontal rows of a periodic table. In total, there are seven periods, each with the same number of atomic orbitals. There are only two orbitals in the maximum period, which contains hydrogen and helium. The number of orbitals increases as you move down the rows.

Groups of the Periodic Table

Element properties are determined by the number of valence electrons present. This is because valence electrons, which are electrons in the outermost shell, are involved in chemical reactions. These electrons are either donating, accepting, or sharing electrons. Additionally, the more filled the valence shell is, the more stable the element.

How many groups are in the periodic table?

Families of the Periodic Table

All of the elements in group one, except hydrogen, are found in the alkali metals. These elements are highly reactive and, for this reason, are usually found in compounds. Furthermore, they are water-sensitive (they react violently with water), so they must be stored in oil. The most reactive alkali metal is francium, and it decreases as you go up the group. This means lithium is the least reactive. The alkali metal family is a silvery, white, and light family. It also has a low melting point and a low boiling point.

Alkaline earth metals are the second most reactive family on the periodic table (after alkali metals). Furthermore, they are strong reducing agents, which means they donate electrons during chemical reactions. Furthermore, they are good thermal and electrical conductors. Their physical characteristics include low density, low melting point, and low boiling point.

Lanthanides are a family of rare earth metals with one valence electron in the 5D shell. They are highly reactive and a potent reducing agent in reactions. Furthermore, they are silvery-bright metal and are relatively soft. As well as having a high melting point, they have a high boiling point. The rare earth includes elements like neodymium and erbium.

Actinides are another family of rare earth metals. Their reactivity is similar to that of the lanthanides. Additionally, they have high electropositivity and are radioactive. Additionally, these elements possess paramagnetic, pyromorphic, and allotropic properties. Physically, they are very similar to lanthanides. Silvery metals, they are soft, malleable, and ductile.

Transition metals typically form two or more oxidation states. They are highly conductive and have low ionization energies. Additionally, they have high melting points, high boiling points, and high conductivity. Physically, they are metals and malleable.

Post-transition metals lie between transition metals and metalloids. At standard temperature, they are in a solid-state of matter. Their density and conductivity are both high. Physically they are malleable and ductile.

The metalloids exhibit both metal and nonmetal properties. Metals, for example, conduct electricity well, while non-metals are poor conductors. This means metalloids are semiconductors (only conduct electricity at high temperatures). They are also brittle, but less so than metals. Shiny or dull, they are typically ductile and malleable and can be either shiny or dull physically.

The name halogen means “salt formers” in Greek. Halogens react with metals to form salts, which is evident. On another note, halogens are a unique group of elements. At standard temperature, they are the only periodic family containing elements in all three states of matter. There are six halogens in group 17. Fluorine (F), chlorine (Cl), bromine (Br), iodine (I), and astatine (At) are among these elements. These non-metals are highly reactive, highly electronegative, and highly toxic.

Ruthenium (Ru), osmium (Os), rhodium (Rh), iridium (Ir), platinum (Pt), gold (Au), and silver (Ag) are noble metals. Due to their complete valence shell, they are inert, like noble gases. In addition, noble metals have catalytic tendencies. Moreover, they are highly resistant to corrosion, tarnishing, and oxidation. Last but not least, they are ductile and soft like many other metals.

The noble gases, also called aerogens, are inert. Some examples include argon, krypton, and neon. Group eighteen on the periodic table contains these elements. They also possess a complete valence shell. Because of this, they are relatively stable and inert. Noble gases also have low boiling points and melting points. In addition, they are odorless and colorless.

On a periodic table, what do the numbers mean?


What do the symbols and numbers mean? An atomic mass (or atomic weight) is indicated by the number above the symbol. An atom consists of all its protons and neutrons. Each element has an atomic number below its symbol, which indicates how many protons are in its nucleus.

What does group number tell you?


The group number in the periodic table represents the number of valence electrons of the elements in a certain group.