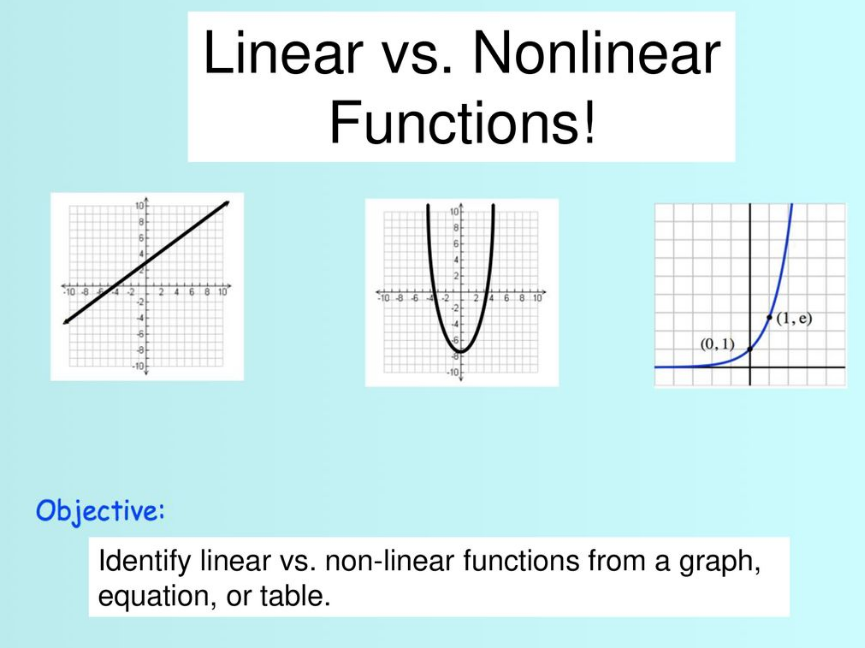 What are Linear Functions?

Linear functions can also be described as a function with a constant slope (rate of change of y with respect to x). In other words, the slope of the line between any two points of the function is the same.

The slope of the line between any two of these points is 2, and this is true for any two points that satisfy the equation y = 2x + 3. Thus, the slope of the function is constant. The graph of y = 2x + 3 is shown below, and we see that the graph is a graph of a line.

An example of a nonlinear function is y = x^2. This is nonlinear because, although it is a polynomial, its highest exponent is 2, not 1. Also, if we consider some random points that satisfy the equation, say (-3, 9), (-1, 1), and (4, 16), we see that when we calculate the slope of the line between these points, we get different results.

Based on all this information, if we want to determine if a function is a nonlinear function, we can do this in a few different ways.

Subtract 6x from both the sides

Substract 9 from both the sides

Q. Solve the following linear equation and find the value of x

What is a nonlinear function example?

Nonlinear Function – A function whose graph is not a line or part of a line. Example: – As you inflate a balloon, its volume increases.

How do you know if a function is nonlinear?

How do you write a nonlinear equation?

The general form of a nonlinear equation is ax2 + by2 = c, where a, b, c are constants and a0 and x and y are variables.