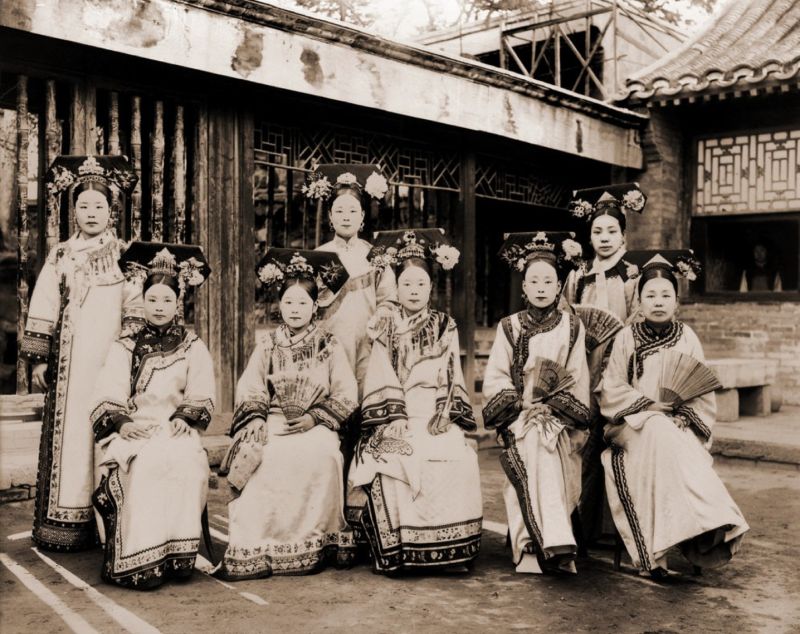 Manchus are a Tungistic people from Northeastern China, meaning “from Tunguska.”. They are the ethnic minority for whom the region of Manchuria is named. Today, they are China’s fifth-largest ethnic group, after the Han Chinese, Zhuang, Uighurs, and Hui.

China was ruled by the Jin Dynasty from 1115 to 1234, but their prominence by the name “Manchu” didn’t come until the 17th century.

Despite this, Manchu women were more assertive and more powerful than most other Chinese ethnicities – a trait that carried into their assimilation into Chinese culture.

Unlike many of their neighbors, such as the Mongols and the Uighurs, the Manchu have been settled farmers for centuries. In addition to sorghum, millet, soybeans, and apples, they also adopted tobacco and corn from the New World. In Manchuria, cattle and oxen were raised as well as silkworms were tended.

They farmed the soil and lived in permanent villages, but they shared a love of hunting with the nomadic peoples to the west. Along with wrestling and falconry, mounted archery was a prized skill for men. Some Manchu people still practice falconry today, just like Kazakh and Mongol eagle-hunters used birds of prey for hunting waterfowl, rabbits, marmots, and other small prey animals.

The Manchu people were primarily shamanists before their second conquest of China. For the purpose of curing sickness and driving away evil, shamans sacrificed to the ancestral spirits of each Manchu clan and performed trance dances.

As a result of Chinese religion and folk beliefs permeating Manchu belief systems during the Qing period (1644 – 1911), some elite Manchus abandoned their traditional beliefs altogether and adopted Buddhism instead. As early as the 10th to 13th centuries, Tibetan Buddhism had already influenced Manchu beliefs.

Han Chinese sensibilities were shocked by Manchu women’s assertiveness and equality with men. As it was strictly forbidden, girls’ feet were never bound in Manchu families. In spite of this, the Manchu people were assimilated into Chinese culture by the early 20th century.

As Jurchens, the Manchus founded the later Jin Dynasty from 1115 to 1234, not the first Jin Dynasty from 265 to 420. During the chaotic time between the Five Dynasties and the Ten Kingdoms period from 907 to 960, and the reunification of China by Kublai Khan and the ethnic-Mongol Yuan Dynasty in 1271, this later Dynasty competed with the Liao Dynasty for control of Manchuria and northern China. In 1234, the Mongols conquered the Jin, paving the way for the Yuan conquest of all of China three decades later.

However, the Manchus would rise again. A Ming general invited the Manchu army to join him in recapturing Beijing after Han Chinese rebels sacked the capital in April 1644. Despite complying, the Manchu did not return the capital to the Han. In 1644, the Manchus announced that they had received the Mandate of Heaven and installed Prince Fulin as the Shunzhi Emperor of the new Qing Dynasty. Over 250 years later, the Manchu dynasty would be the last imperial dynasty in Chinese history.

Chinese culture and traditions were quickly adopted by previous foreign rulers of China. Qing rulers also experienced this, but they remained resolutely Manchu in many ways. As a nod to their traditional lifestyle, Manchu rulers of the Qing Dynasty staged annual hunts even after more than 200 years among the Han Chinese. Han Chinese men were also forced to wear a Manchu hairstyle, called a “queue” in English.

It is unclear where the name “Manchu” originated. In 1636, Hong Taiji prohibited the use of the name “Jurchen.”. Scholars do not know if he chose the name “Manchu” in honor of his father Nurhachi, who believed he was Manjushri’s reincarnation, or whether it is derived from the Manchu word “mangun” meaning “river.”

The People’s Republic of China has more than 10 million ethnic Manchu people today. Manchu is, however, only spoken by a handful of elderly people in remote parts of Manchuria (northeast China). In modern Chinese culture, their history of female empowerment and Buddhist origins remain.